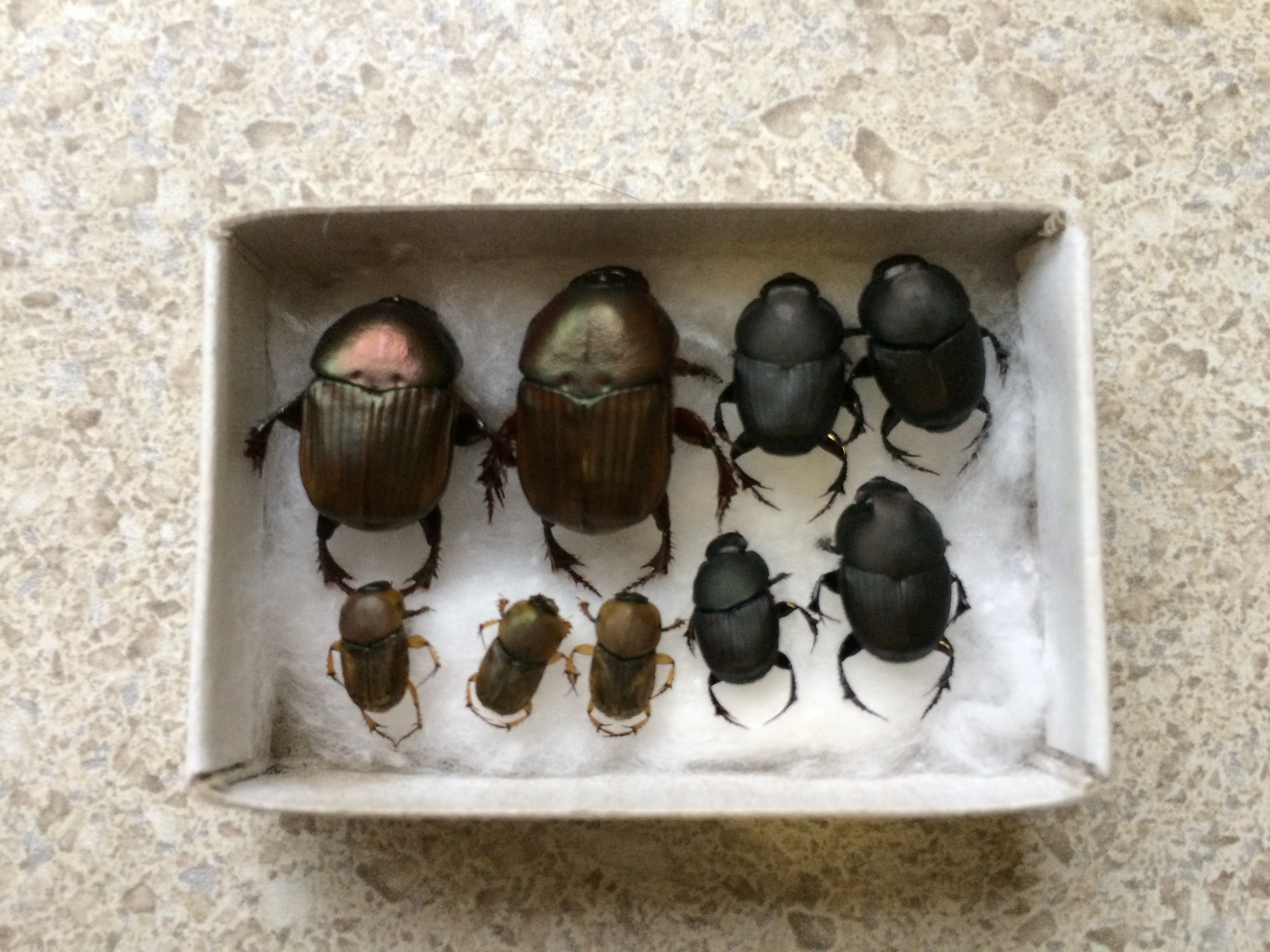 Australia has more than 500 species of native dung beetles and 23 species of dung beetles introduced from Hawaii, Africa and southern Europe. The introduced dung beetles are very useful in Australia’s agricultural regions. Where they are well established, these dung beetles bury large volumes of cattle and horse dung. Some species can remove a pat in less then 24 hrs! The removal from dung under ground by beetles have many benefits for soil, water and pasture, as well as biological control of the bush fly and parasitic worms.

Most native dung beetle species eat marsupial dung (from kangaroos and wallabies) and they don’t process the moist dung of domestic farm animals very well. A few native species (mainly in southern Australia) can consume the moister dung of horses, sheep and cattle. Thus as part of a larger Dung Beetle project about 40 species of exotic dung beetles have so far been introduced to break down the manures of farmed animals (only 23 have been successful). The Australian Dung Beetle Project (1965–1985), conceived and led by Dr. George Bornemissza, of the Commonwealth Scientific and Industrial Research Organisation (CSIRO), was an international scientific research and biological control project with the primary goal to control the polluting effects of cattle dung.

Climatic and geographic limitations necessitate 6-10 species be colonised on farms to get year round activity in dung removal. Most dung beetle activity takes place in spring, summer and autumn but recently a winter active species has been identified for introduction to farms in southern Australia. And, in any case, earthworms are at their most active during the winter converting organic material into plant food and aerating the soil. 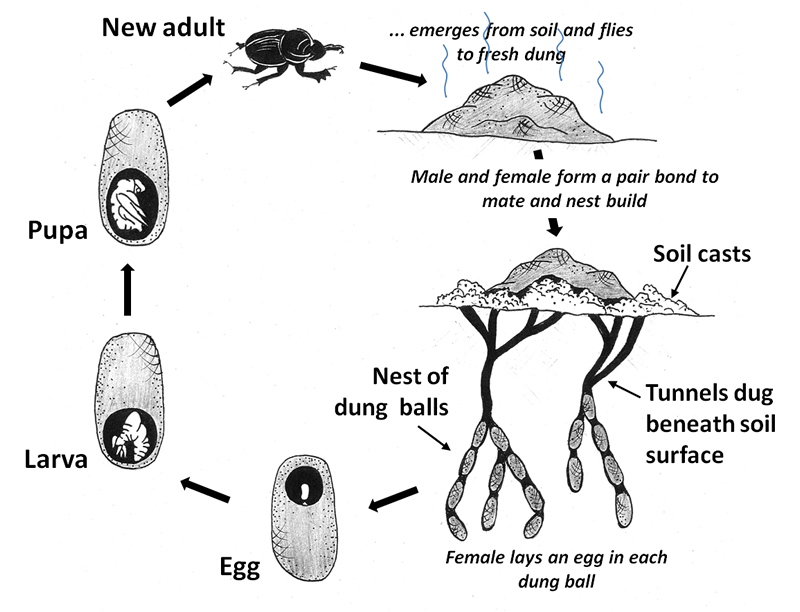 The life cycle of dung beetles sees beetles actively consuming dung and burying it for 2-3 months followed by a hibernation period. Only when similar seasonal conditions prevail do the beetles once again become active, coming out of dormancy from the eggs that were laid up to 300mm in the soil during the previous active season. Depending on species, some dung beetles will go through 1-2 life cycles during an active season. Each mature female beetle will lay 60-80 eggs in a season thereby increasing population by this factor in one generation. Dung beetles are known to spread up to 2km per year if unimpeded by bush or barrier and will diminish in density for a period of time after their release before consolidating their population. 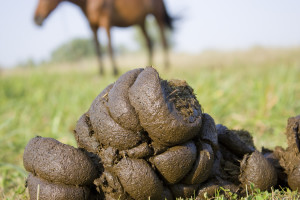 Dung beetles are very beneficial to our pastures, our horses and us. For us horse owners this means, less cleaning paddocks and poo shovelling, and free soil development without any efforts! They also help controlling fly and parasitic worm populations, which is great news for our horses.

So if you have dung beetles – take good care of them and if you don’t have them.. you probably have them in the ground.. but you need to create the right conditions for them to establish. It is also possible to buy or get dung beetles from organisations/ institutions in your region that you can release. Make sure that they suit your soil conditions, as they are very fussy about the type of soil as well 🙂

Dung beetles help break down poo, transporting it underground, which helps with soil decompaction and fixing nitrogen. But be aware that if your pastures are severely compacted, even dung beetles cannot do the work for you. If the soil is too hard, they will die as the spikes on their legs get eroded and without them they cannot burry themselves into the ground. Thus if you find that you don’t have beetles or very small amounts you may need to first look at soil development such as decompacting using Keyline ploughing or composting and mulching strategies.

Also dung beetles require fresh dung, so its important that you don’t remove all the good manure and allow beetles to establish. Remove older pats that have been decomposed at least 3-4 days. You typically can see that the pat is all broken down and spread and only larger fibre components are visible. They also have a greyish colour and are dried out.

Care with wormers and other chemicals

Many treatments for the control of cattle or horse parasites and pests have negative effects on dung beetle survival, breeding capacity and activity.

A thorough review of the effect of macrocyclic lactone(ML) drenches on dung beetles has shown that that toxicity rankings against non target species was greatest for doramectin, followed by ivermectin and eprinomectin, with moxidectin being significantly less toxic to non-target species.

Ivermectin is a very effective anti-parasitic drug that has been used as a preventative in livestock since its discovery in 1981. Since then its use has increased exponentially to become a standard drug in the treatment and prevention of common parasites, including in human beings. While considered by the World Health Organization as an essential medication and proven very effective, its widespread use comes at a price.

The issue, researchers have found, is that the ivermectin molecule can survive its journey through the animal and be excreted unchanged. Also, once on the ground, residues can remain active in animal dung for at least a month. This means the drug hits the arthropod populations as hard as it does the parasites it is intended to prevent. The ingestion of ivermectin affects even mature dung beetles, seriously compromising their mobility, orientation and reproductive capacities. These findings contradict international veterinary manuals and yet offer a compelling explanation for the decline in population levels reported in other research.

While invermectin may be harmful to beetles it is not to say you cannot use it, as many horse owners like them for the control of bots. You just have to be aware of the timing – either late autumn (when it gets colder) or very early spring before it warms up. This avoids the period (summer) when most dung beetles are active.

Other dewormers like fenbendazole and oxibendazole are also commonly used, but they are less toxic compared to invermectin or other avermectins. Dewormers with moxidectin aren’t as lethal to immature beetles and have a shorter time of toxicity (only 3 days after drenching). Choosing this drench will ensure that management decisions for parasite control will have no effect on dung beetle activity. However you will need to review the chemical used as resistance in horses is another factor you need to consider when choosing the type/ brand of dewormer. Before you take action and buy your de-wormer, its advised that you do a faecal egg counts (FEC) check for each horse on the property, which helps with identifying the severity of the worm burden. Faecal egg counts (FEC) of less than 200 eggs per gram is regarded as a ‘low’ and no further action is required. So often only a few horses require treatment. However FEC won’t work for encysted worms, tapeworms or worms at the life-cycle stage where eggs are not being laid.

To ensure that you don’t kill many dung beetles in your pasture it is generally advised to manage your horses for at least 3-7 days in a sacrifice area, central point or yards after drenching, so that you can collect the poo for these days. As mentioned earlier avermectins such as invermectin may still be active for many weeks – but in this way you reduced some of the toxic effects. 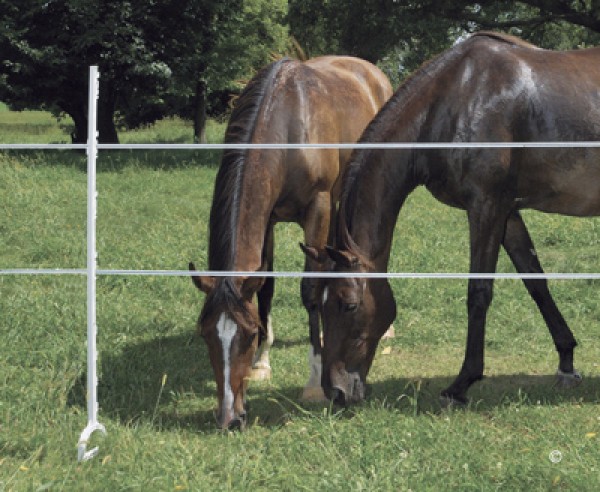 When horses graze they are very selective. They can eat down some areas until it’s almost bare, whilst leaving other areas in which they dung and urinate untouched. If these paddocks and pastures are not managed properly you can get over-grazing and “horse-sick” pastures with poor quality grasses, accumulation of weeds, compacted and eroded soils, manure build up and populations of parasites. Horse-sick pastures may be more evident when there is insufficient land, but also larger horse properties can have these problems. These horse-sick pastures not only affect the health of your horse, but also negatively influence the shape of the land and can reduce the value of your property or land to which it is attached.

To manage both soil and parasites; pasture rotation, strip grazing and cross-grazing (alternating with livestock) are effective ways to reduce parasite survival. Also rotating horses to “fresh” pastures ensures recovery of grazed pastures and allows you to work on soil development (e.g. composting, mulching, keyline ploughing), which helps with keeping the soil healthy for your soil workers. As mentioned earlier in severely compacted soils dung beetles cannot survive, so taking care of this problem is important. Understandably we will never fully avoid compaction along boundaries, water and feeding points, but by timely grazing and moving animals frequently this compaction is less severe and can be easily restored using mulching techniques or just recovery time if you have healthy soils to start with. 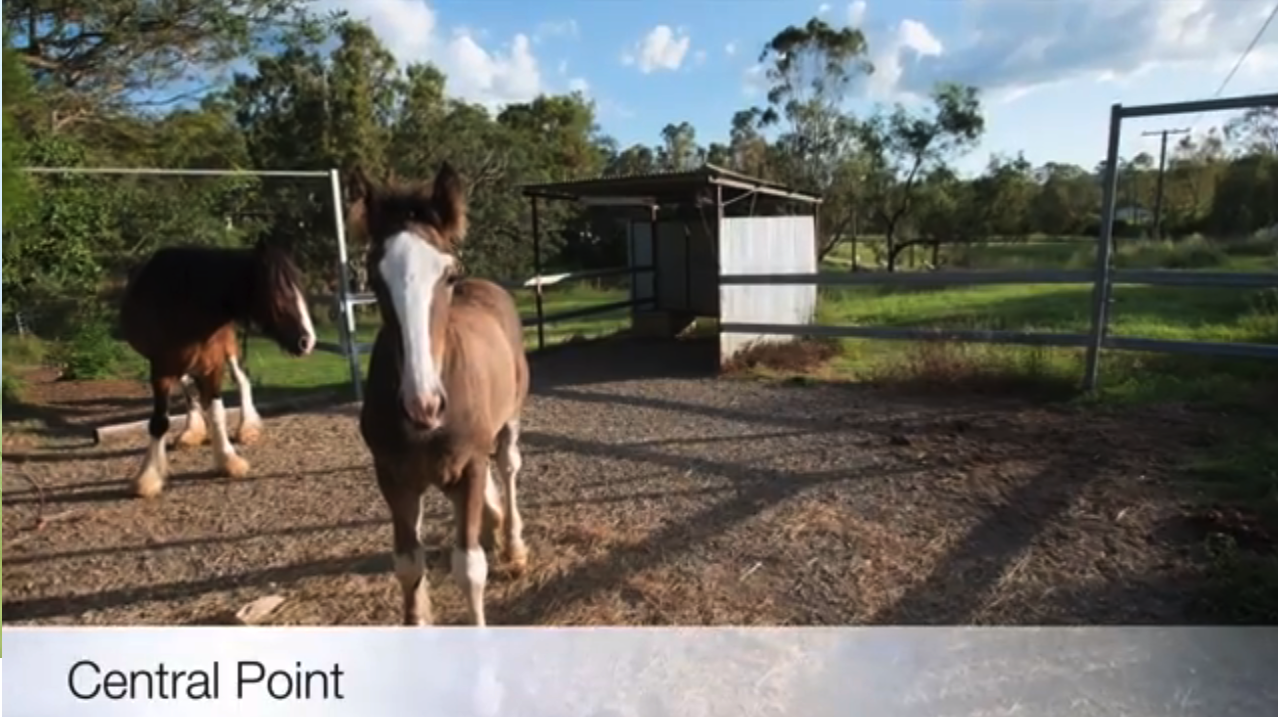 Another solution is to use track and sacrifice/central point systems that can take some of the regular congregating of animals. As the word is suggesting, this is an area that you sacrifice for pasture/ plant growth and clearly allow compaction. Typically these systems are used to provide a central space for water, feeding or to move horses off pasture for plant recovery or reducing pasture intake. The design of your sacrifice/ central points will largely depend on the number of horses, space available and budget. While you allow compaction to happen in these areas it is important that you pay close attention to the drainage and footing of these areas so you avoid mud build up which can be very dangerous for you and your horses. You will need to look at the shape of the land and review if you need to level and prepare this area in such away that it allows water to slowly be drained without causing quick run off (and erosion). The sacrifice area will need to be fenced off and requires a border around the footing to avoid run off. You can even build a (rock) rain garden that can take some of the extra run off water (kind of like a mini swale!).

There are many types of materials that can be used as footing and your choice will largely depend on your preferences, availability and budget. River sand, pea rock gravel, and wood chips are regularly used for their comfort and/or price and can be applied to different areas. You can even decide to use ground stabilising products such as plastic pavers with a cell-like structure (honeycomb or diamond). Typically sand or pea rock can be used to fill the grid spaces and this will allow water to pass through, without making it into a muddy area. This system can be very useful for high impact areas such as gateways, tracks and water points. However, it still needs to be managed and manure should be taken away regularly to avoid build up that can turn into a slurry.

If you have horses and manage them mostly on pasture- You WANT dung beetles!! They muck out your paddocks, build carbon and increase the availability of nutrients and water. Dung beetles, but also other soil workers such as earthworms, fungi and bacteria are all important for the health of our soils and pastures. We never feed plants directly – its through the process of breaking down organic matter which is done by our soil workers. While they do all the work – we still need to be involved with the process, guiding it in the right direction and creating conditions that the soil workers thrive in. This means that we need to have an integrative approach for the management of our horses and pasture. Selective worming, pasture rotation/resting and cross-grazing with livestock will all contribute to maintaining healthy soils, reducing parasite burden and resistance in horses.

Stay turned for the next blog post – I have a dung beetle expert and students from the University of New England visiting  my own property to check out the species I have. I will report on our findings and dicuss the management I have done so far to manage my soil workers 🙂 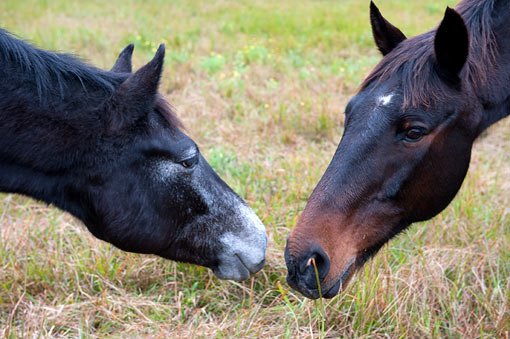 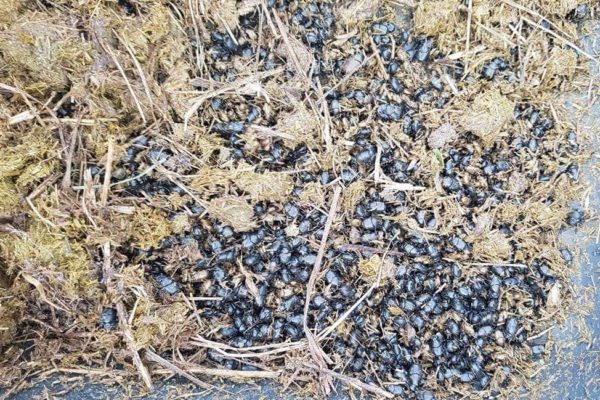