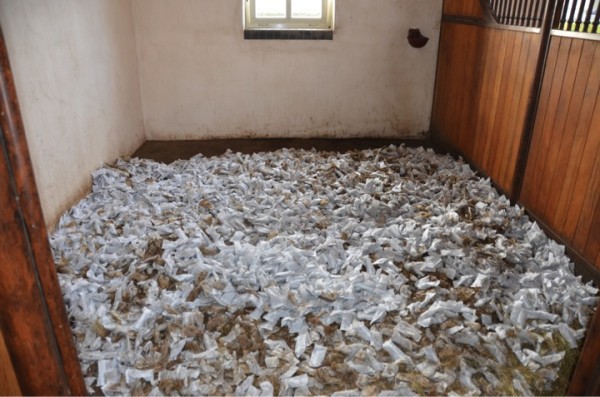 A recently published pilot study compared the traditional straw with a novel bedding product suggesting it can reduce dust and ammonia concentration levels in stable barns. The Noord-Holland centre of technology (TCNN) worked in collaboration with the Van Hall Larenstein University of Applied Sciences (Leeuwarden), a veterinary practice and local R&D businesses to study the performance of peat pads as a stable bedding and how they effect air quality in the stables.

Many horses are housed for long or short periods in stables and, depending on the location and stable management practices, different types of products are used as bedding to make the stable area comfortable for your horses and to be able to easily clean up their manure and absorb urine. When it comes to stable bedding most people think of straw or wood shavings although there are actually many other choices, such as, sawdust, wood pellets, sand, rice hulls, hemp, coconut fibre, hay, moss, horse mats or even paper and cardboard. Not all of these products are economic nor easily available in all areas, so your choice will largely depend on where you live, the types of horses (e.g. mares and foals, horses with metabolic disorders or respiratory problems etc), your budget, as well as your waste disposal system and stable management practices.

All bedding products currently available have their pro’s and con’s. Some of the commonly used bedding materials (in particular straw, shavings, saw dust and paper) seem to cause a lot of problems in stables, particularly when horses need to be housed for longer periods (e.g. in the northern hemisphere, or in intensive training facilities).

Dusty bedding, for example, can affect the respiratory system of horses, and excess ammonia derived from urine can cause health issues in both humans and horses (nobody likes the smell of ammonia!). Although some of the above mentioned bedding products would be less dusty and have better absorption than others, they can be more expensive than straw or unavailable in your area, leaving openings in the market for new and better products to be developed. This is what drove the Dutch-German collaboration between industry and university to investigate the use of ‘peat pads’ as a solution.

So what are these peat pads? Mr. Jos Dierks came up with the idea when making a cup of coffee using the well known coffee pads (ground coffee beans pressed together in a paper pocket similar to tea bags). He experimented with a large quantity of coffee pads in a stable and found they may help reduce dust and ammonia. This lead to a designed pilot study which swapped the coffee filler for peat!

Peat (sometimes called ‘turf’) is a spongy material formed by the decomposition of organic matter that is unique to natural areas called peatlands or mires (very common in England, Scotland, Finland and the Netherlands). Throughout mankind’s history, peat has been used as an energy source and is famously used in Scotland to dry (and flavour in the process) the barley grain used to make whisky.

The researchers filled paper sachets of about 15 cm in length with dried peat and, just like coffee or tea bags, the sachets were closed on both ends to make each peat pad. 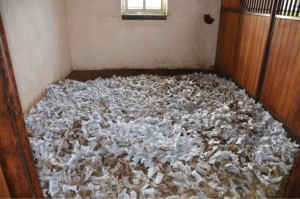 The pads were supplied to two horse facilities, “Der Polderhof” in the north of Germany (Bunde) and  “Oldenziel” Stables in the North of the Netherlands (Gieten) that tested the pads as a bedding and used straw as a control. At the Polderhof facility peat pads and straw were used in stables alongside each other for comparison, but at the Oldenziel location they used a single stable and took measurements from the straw bedding before replacing it with the pads. 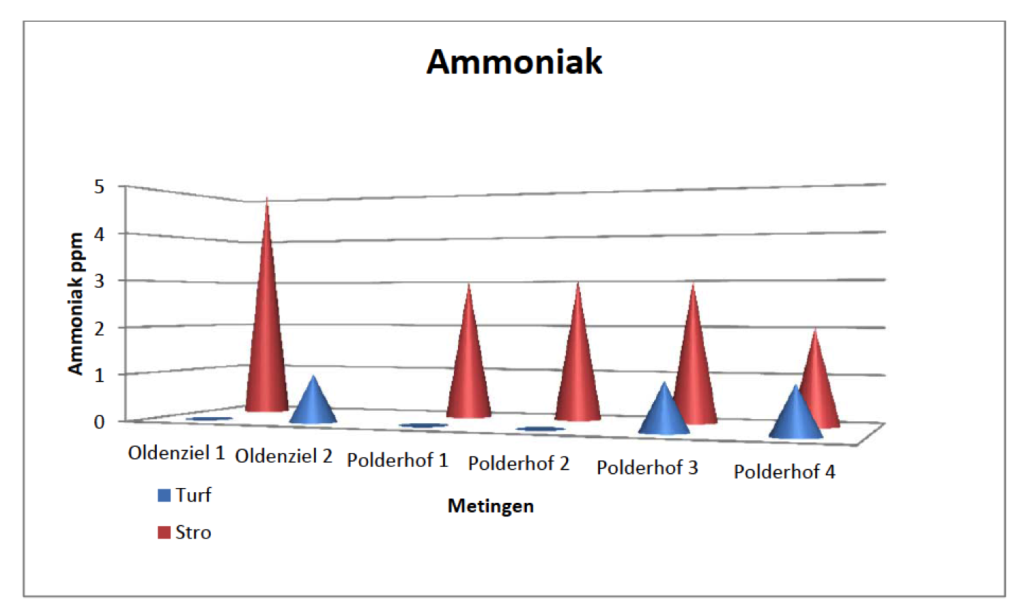 Dust
Dust particles between 0.5-2.5 μm and bigger than 2.5 μm per dm³ were measured. They found no differences between the beddings and how they were handled for dust particles between 0.5-2.5 μm. But there were differences between the bedding materials when particles of 2.5 μm or larger were measured. At the Oldenziel location 2 measurements were taken. In the first phase the stable had a straw bedding which showed an average of 2999 particles/ dm³ when undisturbed. During cleaning of the stable (taking out the straw) the particles increased to 5401 particles/ dm³. After cleaning and placing the peat pads the concentration decreased to about 1400 particles/ dm³. That is a reduction of about 53%. The second measurement was conducted 2 days later and showed a stable particle concentration for the peat bedding when undisturbed. In addition, there was a minimum effect of mucking out of the stable (1231 particles / dm³).

At the Polderhof location they conducted 4 measurements and compared 2 stables with either a straw or peat pad bedding. When the bedding was undisturbed the particles for straw were 1408 particles/ dm³ and for peat pads 805 particles/ dm³ (42% difference).  They also measured the particles when new bedding material was placed. There was only a small peak after placing new pads with 90% of particles clearing within 5-10 minutes. The adding of new straw had a obvious increase (larger peak) in particles and the clearing of these particles took longer. The researchers repeated the same measurements and found similar patterns. They also conducted measurements at a height of 1.5 meters, but found no differences between the beddings. The 4th measurement at the Polderhof facility showed no differences between the beddings which seemed to be related to the quality of the peat (moisture content).

Conclusion
Based on the pilot study the researchers conclude that peat pads; 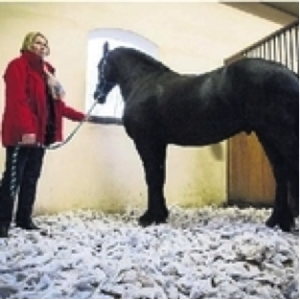 This is a very interesting pilot study using peat as a bedding which is type of soil with a high organic matter. Taking the soil into the stable! Although not mentioned in the report, it is highly likely that peat pads would be easily composted and highly biodegradable – a plus for the environment. Also not detailed in the report is how economic this manufactured bedding would be, and it is unclear how comfortable the bedding is for the horses and how strong the pads are (do they break easily?). Nevertheless, the study of new forms of bedding is a great initiative. What do you think?

If you can read Dutch 🙂 here the full report: http://www.tcnn.nl/images/december2014/Eindrapport.pdf 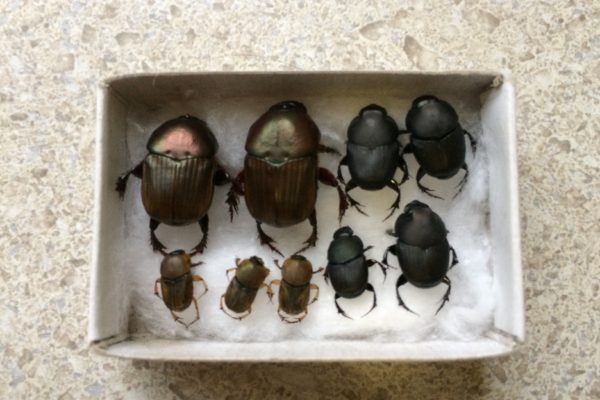 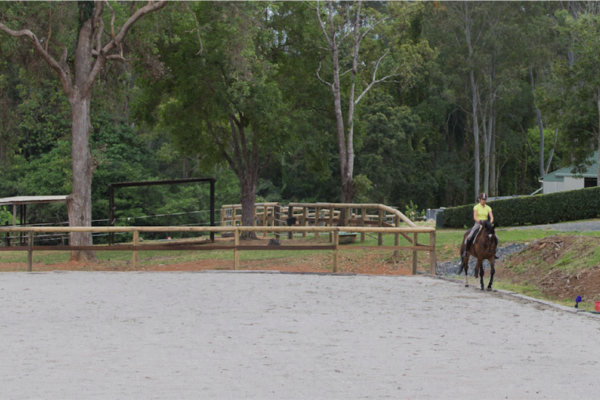 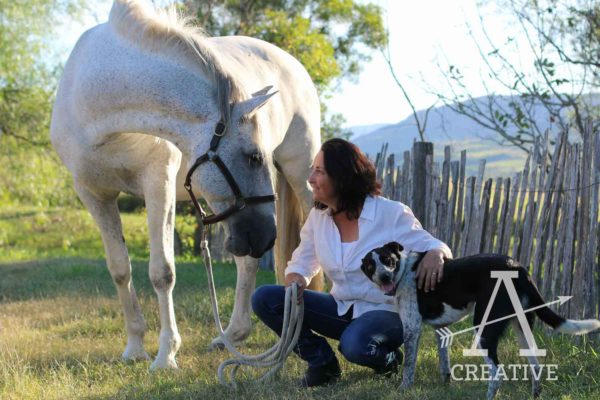